We all like to buy things “on sale”. There’s a psychology to it. Recently my wife bought a blender but I was pleased that she was able to find one for 30% off. Although I was still a little upset that she broke our old one. It’s the relative price change that causes us to think something is a “good deal”.

After the housing market “crashed”, how many times did you think about buying a rental property? Of course it’s a good time to buy – homes are “on sale”. You can enjoy a bit of income and the renter is paying the mortgage. And, you knew that prices would likely go up from that point.

Now consider the stock market. Did you think that March 9, 2009 was the perfect time to buy stocks? I’m guessing not. During 2008 and the beginning of 2009, nobody wanted to buy stocks even though they were “on sale”. 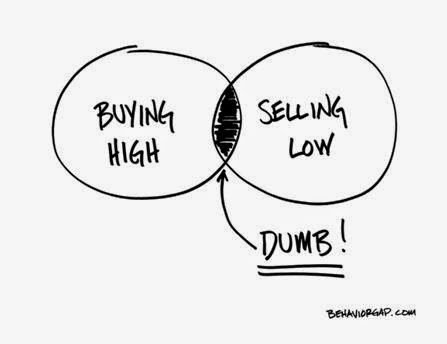 Unfortunately, this is common for investors. There is much research to show that equity mutual funds have the most money flowing into them when the market is going up (and near its peak). And conversely, as the market hits bottom, money is flowing out of equities. That is not the way to invest!

Our approach is to stay invested and rebalance. A disciplined investment strategy has proven time and again to yield superior investment returns. When the market dips, you should be thinking “How can I buy more stocks? They’re on sale right now!”

Markets can be hectic, noisy and stressful.  The financial media sensationalizes everything.  Keeping market results in perspective is a constant struggle.  We don’t recommend watching on a daily, weekly or monthly basis.  It can feel much like a trip to Magic Mountain theme park.  Even watching on an annual basis can be unproductive.  However, if you insist on watching despite the perils, consider a different focus.  Consider, especially during the accumulation years, a focus on “shares” not values.

We typically focus on portfolio value (at a given point).  Portfolio value is simply each mutual fund share balance multiplied by the corresponding share price (Net Asset Value (NAV)).  The NAV itself represents the collective price of the underlying basket of securities (stocks or bonds).  What then is the primary driver of portfolio volatility?  Changes in the share price (NAV) - what someone is willing to pay for the underlying basket of securities.  The number of shares does not fluctuate with the market.  Shares do not fluctuate unless you buy, sell or reinvest dividends.

It’s a fairly simple concept.  But a share balance focus can have a profound effect.   It helped many of us cope with the 2008 economic crisis.  A focus on shares reminded us that fluctuations in price (attached to the shares we own) aren’t realized until shares are sold.  This realization is especially powerful connected with the notion that investing is a lifelong commitment – with no specific destination.

There will, of course, come a point when you sell within your portfolio.   You do, after all, save money to spend it.  But it’s not a destination.  Your shares will continue to grow in value.  Your shares will continue to generate income.  Your portfolio value will fluctuate but your shares won’t.  As long as your withdrawals are reasonable (we spend a lot of energy defining a “reasonable” withdrawal rate), the selling is modest and periodic.  The shares you accumulate will provide for you.  You will survive the downturns.

A strong faith in markets is important.  It’s one of the reasons for this blog.  But it won’t make you immune to “noise”.  If you find yourself caught up in the headlines, remember your shares.  Remember Death, Taxes and New Market Highs.  You don’t have to watch markets like your neighbor.  You might ask your neighbor a riddle instead. “How many shares did you lose during the economic crisis?”

Posted by Pathways Advisory Group, Inc at 10:17 AM

Have you received a tax form in the mail recently? If not, then disregard this post. If, however, you did receive a 2013 IRS Tax Form 5498 recently, do not panic. Form 5498 is generated by investment custodians every May for Traditional or Roth IRAs with activity during the previous tax year and usually does not lead to an amended tax filing. Tax Form 5498 is informational. The IRS reconciles this activity with your Tax Return. If you received this form, ask yourself: "Did I contribute to a Roth or Traditional IRA last year? Did I roll money into an IRA last year? Did I convert IRA money to a Roth IRA last year?" If any of this activity applies to you, you received Form 5498. Contribution information is typically requested on an accountant's questionnaire. Rollovers and conversions generate a 1099-R. Either way, your accountant should already be aware of the activity. Then what should I do with my copy? In most cases, simply add it to your freshly started tax folder for 2014. As your accountant reviews next year's tax file, he or she can confirm that the activity was addressed.

The above explanation is summarized and generic. Please consult your tax professional with any specific questions.

A common headline in the financial media is that the market (DJIA, S&P 500 and Nasdaq) has reached an “all time high”.  Fortunately, after emerging from a deep recession in 2009, it’s been a common headline the past few years.  It happened 52 times with the DJIA last year alone. Following the headlines is always entertaining.  What I find interesting about this particular headline is the reaction.

“If we keep hitting all-time highs, the market must be over-valued”.  “We are due for a pullback”. “I think the market has topped out, don’t you?” As you know, we don’t.  We take a much different view of markets.  We prefer to look at it from a distance – sort of like viewing a neighborhood from the air.  When you look at it this way, you realize that all bear (down) markets are temporary pullbacks on a PERMANENT bull (up) market.  You look at investment decisions as a risk/return trade-off – not a timing event.  You look at investing as a permanent fixture of life.  You look at new market highs as an inevitability – as certain as death and taxes.

There are lots of details to debate.  And it’s important to debate them.  But it’s also liberating when you emerge from the “weeds”.   Short-term results are noisy.  But markets thrive.  Despite world wars, terrorism, recessions, depressions, bad government policy, bad economics and constant uncertainty, markets thrive.  They always have.  We believe they always will.  Nick Murray, who frequents our newsletter via his client corner commentary, put it best in Simple Wealth, Inevitable Wealth, stating that “the only realism is optimism.” When you take a step back, that’s what you see.

Don’t believe me?  Take a look at this chart.

And the history of the Dow Jones Industrial Average (DJIA).

It’s not just about what has happened but also why it has happened.  It’s not an anomaly.  Look as far back as you can.  Look at all twenty year time periods.  Look at prosperity in general.  Look beyond our borders.  Look beyond recessions.  Look beyond pullbacks. The worldwide engine of capital markets and ingenuity is too powerful to stop - it’s a locomotive.  Punch your ticket.  Watch from the air.  Don’t sweat the headlines!