A Walk on the Bright Side


Once there was a father of twins: Owen the optimist and Paul the pessimist. The father decided to conduct a Christmas experiment. He loaded Paul’s room with every imaginable toy and game. Owens’s room was piled high with horse manure.

That night the father passed by the pessimist's room and found him sitting amid his new gifts crying bitterly.

"Why are you crying?" the father asked.

"Because my friends will be jealous, I'll have to read all these instructions before I can do anything, I'll constantly need batteries, and my toys will eventually break." answered the pessimist twin.

Passing the optimist twin's room, the father found him dancing for joy in the pile of manure. "What are you so happy about?" he asked.

Owen replied, "There's got to be a pony in here somewhere!"

Which twin do you relate to? Hopefully - neither. Paul will enjoy his toys; Owen won’t find a pony. There is real damage from the past two years: smaller nest-eggs, job losses, a ridiculous national debt, moral hazard, fear and anxiety, inevitable over-regulation, and the Steelers Superbowl victory. However, there are silver linings. Two years ago, would you have used responsible and lending in the same sentence?

We have worked on a number of refinance decisions this past year. My first encounter with the phenomenon of “responsible lending” occurred in June. Months of discussion with the current lender and still no refinance approval. We were frustrated. The client had good credit. They had enough equity. What is the holdup? Could it be they are just being thorough? Since this encounter, similar stories have continued. It was not an anomaly. Irresponsible lending was a primary catalyst for the severity of this recession. There are signs of change for the good.

Just this week, a refinance discussion revealed another change. Each potential lender is requiring an appraisal through an independent third party appraiser. Why? To improve the odds of a successful loan and to limit the risk of a reckless broker. What a concept! Gone are the days of - ask for a value and you shall receive. Can it be frustrating? Yes. 9 times out of 10 an independent appraisal, in today’s market, will come in lower than you think. More conservative lending, however, is a step in the right direction. Two years ago irresponsible appraisers could not resist conflicts of interest. This ignited the fire of irresponsible lending and fueled the real estate bubble.

Is the consumer just as guilty? Yes. Will there be over-regulation? Yes. We will get plenty wrong. However, some change will be for the better. FDIC insurance, investment margin requirements, the SEC and mortgage call protection all came from the lessons of the Great Depression. Comparing this event to the Great Depression is an insult to those who lived through it. This recession, however, may be just the reminder we needed.

Posted by Pathways Advisory Group, Inc at 8:48 AM

Email ThisBlogThis!Share to TwitterShare to FacebookShare to Pinterest
Labels: Dustin


The past 24 months have been challenging. Investors who fled to safety missed out on significant gains. Investors who stuck to an asset allocation endured mounting losses and sleepless nights. It has not been easy - for anyone. Many investors are searching for a better way.

Investor: Looking back on the past two years, what would you do differently?

Advisor: That’s easy - I would have cashed out in 2007 and bought Gold. I would have returned to equities in March and margined the account.

Investor: Does that mean you will suggest an exit strategy next time?

Advisor: Unfortunately, it doesn’t work that way. Market timing is like Monopoly - the traps are different every time you play. Landing on Park Place may be safe this time but next time it will cost you. Monopoly, however, isn’t real.

For me, the search for a better way stumbles on the same two issues each time. First, markets are unpredictable. Second, missing out on returns can ruin a financial plan. 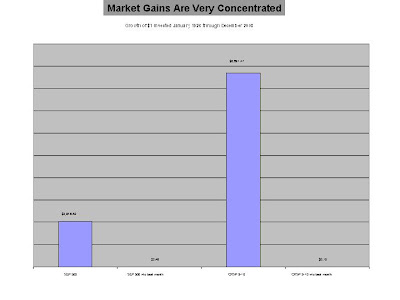 This is an extreme example to make a point. Nobody could time it exactly wrong - although some people feel that unlucky. The point, however, is the majority of the returns the last 83 years came in less than 10% of the days invested. Returns come in sharp upward bursts - missing out can jeopardize a financial plan. It’s not just missing returns; it’s missing out on the future compounding of those returns. Thus, the penalty is hugely magnified.

Many are searching for a better way; I just don’t see one. Nick Murray, veteran advisor and columnist, said it best:

Posted by Pathways Advisory Group, Inc at 10:40 AM