We have been informed that Schwab’s 1099s are in the mail. Yet again, Schwab extended their mailing date into February to reduce the number of corrected 1099's, but corrections are still a possibility. Please give our office a call if you have any questions.

Good luck with your taxes!

Posted by Pathways Advisory Group, Inc at 3:15 PM No comments:

Learning Opportunities for Adults in Fresno

Have you heard about the Osher Lifelong Learning Institute (OLLI)?

The OLLI program is offered at California State University, Fresno. It is supported by the Bernard Osher Foundation and created exclusively for adults age 50+ eager to pursue erudition. There are no entrance requirements, grades nor exams; so “students” can learn in a relaxed atmosphere.  The OLLI offers General Sessions and Short Courses that are open to members only, along with Field Trips that are open to members and non-members.

The program offers a wide range of classes on various topics. This Spring, you could attend General Sessions on “How the Arts and Humanities Shape and Transform our World”, “Q & A with Fresno State President Joseph Castro” or “Change in the Eye Over Time”. Short Courses will include “What are the Big Ideas in Biology?”, “Writing your Memoirs” and “The Philosophy of Happiness”. If you wish to take a Field Trip this Spring, the Osher Lifelong Learning Institute could take you to the 2014 Madera Wine & Chocolate Festival, you could visit behind the scenes of a Target department store, or visit Stanford University.

More information is available on the Osher Lifelong Learning Institute website. Ask for their Spring Catalog!

"In case you missed my introduction, take a look at end of the 3rd Quarter Newsletter. I am enjoying my new role as a paraplanner at Pathways and look forward to contributing to the blog." - Leslie
Posted by Pathways Advisory Group, Inc at 10:51 AM No comments:


As mentioned last February, the misnamed “American Taxpayer Relief Act of 2012” (passed January 1st, 2013) provided some much needed answers to the annual tax law uncertainty.  Here is what to expect in 2014: 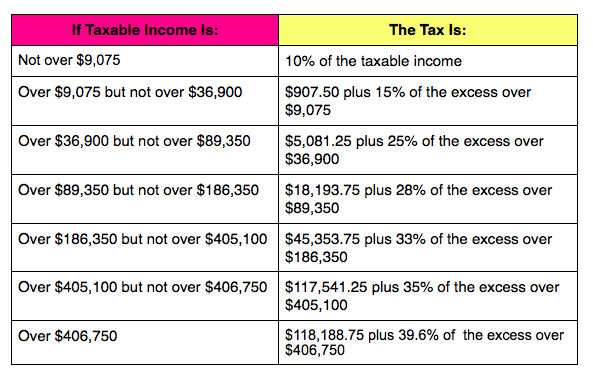 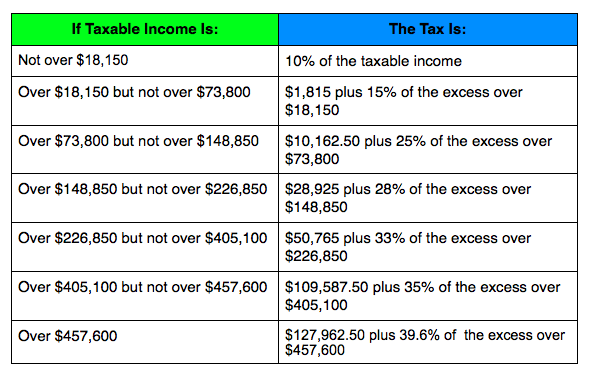 Source: Forbes.com. Click here for a complete version of the 2014 Tax Tables.

Social Security Benefits:  Always an exciting announcement (for recipients), the Social Security benefit cost-of-living-adjustment (COLA) for 2014 is 1.5%.  Recipients should have already received a notice about the benefit increase.

Roth IRA Contributions:  The maximum contribution remains unchanged at $5,500 (plus an extra $1,000 if you attain age 50 or older during 2014) but the Modified Adjusted Gross Income (MAGI) limit that disallows contributions increased with inflation to $191,000 for Married Joint taxpayers ($129,000 for Single taxpayers).  Click here for the range below these thresholds where eligible Roth IRA contribution amounts are reduced.

Personal Exemptions and Itemized Deductions:  Most taxpayers benefit from a Personal Exemption ($3950 in 2014) on their Tax Return.  Some taxpayers also benefit from Itemized Deductions (on Schedule A).  However, both “deductions” are subject to reductions in 2014 if Adjusted Gross Income (AGI) exceeds $305,050 for Married Taxpayers ($254,200 for Single Taxpayers).  The Personal Exemption can actually be completely phased out if AGI exceeds $427,550 ($376,700 for Single Taxpayers). Click here for more explanation. These provisions returned in 2013 after originally expiring in 2010.

In addition to the above changes, some ongoing (2014) implications of the Patient Protection and Affordable Care Act of 2010:

Surtax on Net Investment Income:  The Medicare Surtax (created by the Patient Protection and Affordable Care Act) on “net investment income” remains in effect in 2014.  Unfortunately, the (new in 2013) 3.8% surtax was not indexed for inflation (income thresholds don’t go up with earnings over time), so it will again apply to the portion of “net investment income” exceeding $250,000 of Modified Adjusted Gross Income (MAGI) for Married Joint Taxpayers ($200,000 for Single Taxpayers).  A reminder from last year, ”net Investment income” includes rental income, dividends, interest, capital gains, royalties, passive income and nonqualified annuity payments.  But it does NOT include tax exempt “gains” on the sale of a principle residence.

Itemized Medical Deduction Floor:  The “Floor” that your Itemized Medical Expenses (also on Schedule A) must exceed to qualify for a deduction, increased from 7.5% of Adjusted Gross Income (AGI) in 2012, to 10% of AGI in 2013.  This made it more difficult to qualify for the deduction and remains an issue in 2014.   However, the increased “floor” doesn't take effect until 2017 for taxpayers over age 65.

Medicare Taxes:  The Medicare tax rate remains at 1.45% (2.9% for Self Employed) for Married Joint Taxpayers with earned income below $250,000 ($200,000 for Single Taxpayers).  For earned income above these thresholds the Medicare tax rate increases to 2.35% (3.8% for Self Employed).  Unfortunately, these thresholds were also not indexed for inflation.

Medicare Premium “means” Adjustments:  Social Security benefits have been taxed based on “means” for many years but the “means” adjustment to Medicare premiums receives less attention. Because it was frozen (not indexed for inflation) until 2020 (by the Patient Protection and Affordable Care Act), more and more taxpayers (over age 65) find out about the adjustment each year.  Taxpayers with Modified Adjusted Gross Income (MAGI) under $170,000 ($85,000 for Single Taxpayers) pay the standard monthly Medicare Part B premium of $104.90 (Medicare Part A is free).  Taxpayers with MAGI in excess of these thresholds experience rate increases (up to a maximum premium of $335.70/mo when MAGI exceeds $428,000). Keep in mind that one time “spikes” in income only affect Medicare premiums for one year (it’s a two year cycle, 2012 MAGI would affect 2014 Medicare premiums only). For more information click here.

In addition to changes to the Federal Tax rules for 2014, the effects of California Prop 30 (for some taxpayers) remain for seven years.  Overall, as you can see, there was very little change from 2013 but not indexing all provisions for inflation is a subtle tax increase each year.

The above explanation is summarized. It is not all inclusive. Please confirm all specifics with your tax professional.

Posted by Pathways Advisory Group, Inc at 10:56 AM No comments: